The dawn of timekeeping 

The choice of the pearl of this year falls unquestionably and without reservation on the “Régulateur de bureau” from the workshop of Robert Robin (1742–1799).

Robin is still regarded today as one of the great French masters of the time of Louis XVI. He created extraordinary regulators of the highest quality.

Robin was extremely popular with the members of the royal family – the queen, Marie Antoinette, was particularly fond of his work. He was appointed court clockmaker to the palace of Louis XVI.

Crafted of the finest mahogany, the case from the workshop of Johann Ferdinand Schwerdfeder is adorned with exquisite, original fire-gilt bronze appliqués. Jean-Ferdinand Schwerdfeger (1734–1818) was a German ébéniste active in Paris from 1760. He was a member of the community of great German craftsmen of the second half of the 18th century who emigrated to Paris to escape the doldrums of the economic situation and the strictures of the German guilds in order to build furniture for the French court and others.

The precision movement with a one-month running time works with a chain and fusee to compensate for the release of force by the mainspring. Deadbeat escapement for half-second gridiron pendulum and gimbal suspension with knife-edge. The movement contains an equation mechanism with a differential gear for the second minute hand, which shows the solar time.

The dial by Dubuisson (Étienne Gobin) is exquisite enamel work with the 12 signs of the zodiac as miniatures with golden borders.

Dubuisson, alongside Coteau and Barbezat, was among the innovative and best enamellers of the era in Paris.


This extraordinary jewel has been in the possession of a client for two years and is in flawless working order. The clock is also ideally suited to contemporary home furnishings in view of its compact dimensions (height 46 centimetres). 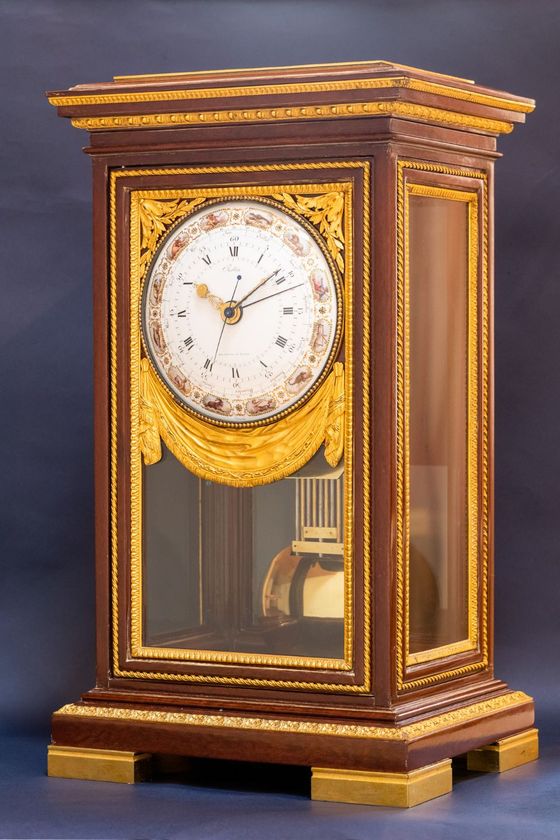 The French lantern clock described here is a specimen of rare grandeur. A true aesthetic masterpiece.

The enamel plaque set in cast bronze beneath the 6 o’clock position on the dial is signed ‘Fouquet Daçon’, and was created in Normandy, France, in the mid-18th century.

The clock is privately owned and continues in faithful service as if the past 250 years had never occurred.

This clock has a prismatic movement design with typical brass cage and twisted columns. The movement features a long pendulum and anchor escapement, as well rack striking with half-hour strike ‘en passant’ via two hammers on a bell.

‘En passant’ means that the triggering of the strike function is done by way of a twelve-toothed star wheel, which generally, as in this case, is connected to the hour wheel of the clock.

This system was widespread in England in the form of the hourly ‘signal strike’.

Framed by ornamental cast bronze, the solid enamel dial with Roman and Arabic numerals is a work of exceptional beauty. It undoubtedly possesses the quality of the great French masters of the day. 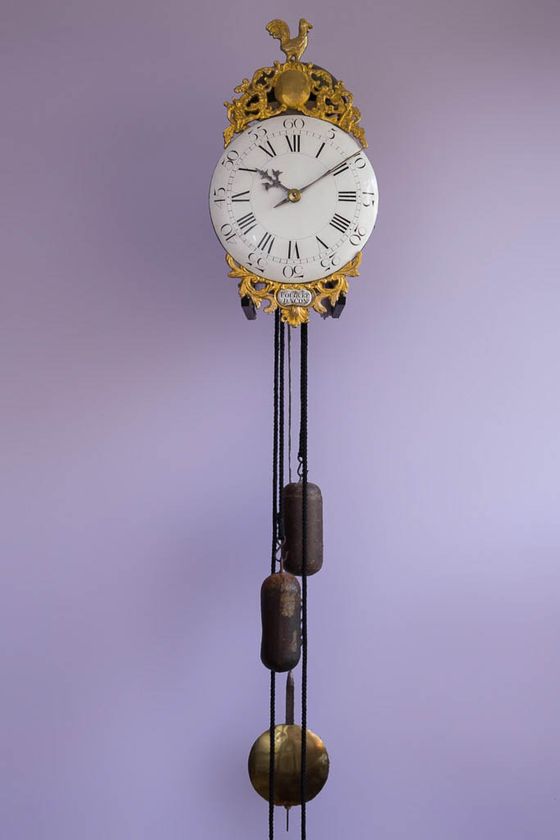 The history of timekeeping

The dawn of timekeeping

The history of timekeeping is the story of humanity’s great leap into a new dimension. This development is inextricably linked with the emergence of time displays, which made it possible to read the time. Movement construction for mechanical timepieces and large clocks only became viable for daily use much later. The craft of watchmaking evolved over centuries from the craft of blacksmithing.

The Earth’s rotation is the reason that the sun, seen from the Earth, rises and sets. Day after day. Since time immemorial, this natural rhythm has shaped the daily activities of millions of organisms on this planet.

But why did humans want to measure time? Was it a drive, or more of a passion, a desire to locate oneself more precisely in time, day or night?

Roughly 12,000 years ago, the last major (Quaternary) ice age, ‘Würm’, came to an end. Nature’s capacity for adaptation made short work of the new climatic conditions. The ice fields were followed by meadows and ever-sprawling forests.
Yet the people in Europe still lived in caves, while in Sumer, between the Euphrates and the Tigris, the first artists were already signing their works of literature.

The major climatic change of the Neolithic period confronted the people with a new environment. Defined by the seasons, a form of changing and recurring climatic conditions forced the people to embrace a fundamental change. It was in this new space that time emerged. And human beings began to measure it.

In a primarily agricultural society, the farmer had to know when to plant and when to harvest. The short span of time between dawn and dusk is determined by the sun. The moon, with its phases alternating between 29 and 30 days, divides the time into months. The rotation of the Earth lets us feel the four seasons. Through the perception and close observation of these natural laws and regular occurrences, the first calendars were made. The oldest ones were only discovered approximately 100 years ago in the area of Sumer.

In retrospect, the calendar can be regarded as the first instrument of timekeeping. These first calendars, used 6,000 years ago by the Sumerians, divided the months into 30 days and the year into twelve months. Yet the lunar month has a range of variation of up to 14 hours. This fact made it impossible to create a precise calendar that corresponded with the seasons over a period of years. Twelve lunar phase cycles do not a year make – another 10,875 days are required.

The reform of the Julian calendar by Pope Gregory XIII in 1582 set forth the rules that we still use today:

a year in the Gregorian calendar has twelve months of 30 and 31 days, except for February, which has only 28 days. It adds up to 365 days. In all years divisible by four, an extra day is added to February, resulting in a leap year with 366 days. To compensate for the seasonal fluctuations, August has 31 days instead of 30, with this additional day being taken from February, and only those centurial years that are divisible by 400 are leap years, whereas the others have just 365 days.

This calendar, born in antiquity, still retains its validity today, at the outset of the 21st century!